The Uninvited by Liz Jensen 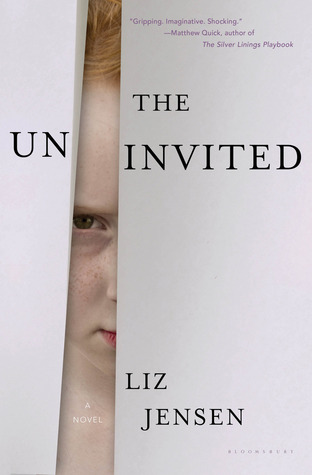 A seven-year-old girl puts a nail gun to her grandmother’s neck and fires. An isolated incident, say the experts. The experts are wrong. Across the world, children are killing their families. Is violence contagious? As chilling murders by children grip the country, anthropologist Hesketh Lock has his own mystery to solve: a bizarre scandal in the Taiwan timber industry.

Hesketh has never been good at relationships: Asperger’s Syndrome has seen to that. But he does have a talent for spotting behavioral patterns and an outsider’s fascination with group dynamics. Nothing obvious connects Hesketh’s Asian case with the atrocities back home. Or with the increasingly odd behavior of his beloved stepson, Freddy. But when Hesketh’s Taiwan contact dies shockingly and more acts of sabotage and child violence sweep the globe, he is forced to acknowledge possibilities that defy the rational principles on which he has staked his life, his career, and, most devastatingly of all, his role as a father.

Part psychological thriller, part dystopian nightmare, The Uninvited is a powerful and viscerally unsettling portrait of apocalypse in embryo.

Overall, I think this book is better than the two-star rating implies. It was really interesting and covers a lot of interesting topics. But, it’s very slow-paced, very different from what the synopsis suggests, and didn’t have enough explanation for my liking.

The main character, Hesketh, has Asperger’s, which I think made his perspective really interesting. I can’t speak from an own voice perspective to the accuracy, but I thought it did a good job.

There were also a lot of interesting settings in this book, which we all know I love.

I think the idea of this book was the best part. The idea and synopsis sound incredibly interesting and enticing, but unfortunately I think it was just poorly executed. It had the potential to be really good, but for me it didn’t work.

What the synopsis more or less leaves out is that there are also major acts of sabotage happening by adults around the world. So there are two phenomenons: the seemingly random violence by children against adults, and the adults sabotaging major international industries. And the real mystery is are they related, and if so, how or why?

I think I would have enjoyed this book more had I known the above going in. The first at least half of this book follow the main character as he attempts to decipher some of the acts of sabotage. I was expecting a book about psycho kids randomly killing family members, not a look at the intricacies of white-collar sabotage. So that’s an issue with marketing, but it’s still an issue I had with this book.

And I just wanted more explanation overall. I think this is one of those books that is trying to be speculative and open-ended, but I personally need a little more explanation. Even just 20 more pages with a tiny bit more explaining. Even vague explaining would’ve been better than the little we got.

Lastly, I think the pacing was off. This kind of relates to what I was just talking about with wanting more explanation, but the ending was kind of rushed whereas the beginning took ages. I don’t necessarily think anything needed to be taken out, but there definitely could’ve been more at the end. It’s kind of slow, slow, slow, some action, and then all the action in about 30 pages. The book is only 300 pages long; it could have had another 50 pages and a more satisfying ending.

All in all, I’m not sure where I stand about recommending this book. I think if it was on your radar, I’d still pick it up. If you want a book with Asperger’s representation that isn’t about Asperger’s, this would probably be a good one. But I also wouldn’t just recommend picking it up if you hadn’t heard of it before this post.

Have you read this book? What were your thoughts? Do you plan on reading it? Let me know!

5 thoughts on “Book review: The Uninvited”