The Midnight Dance by Nikki Katz 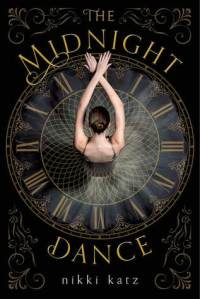 Seventeen-year-old Penny is a lead dancer at the Grande Teatro, a finishing school where she and eleven other young women are training to become the finest ballerinas in Italy. Tucked deep into the woods, the school is overseen by the mysterious and handsome young Master who keeps the girls ensconced in the estate – and in the only life Penny has never known.

But when flashes of memories, memories of a life very different from the one she thinks she’s been leading, start to appear, Penny begins to question the Grand Teatro and the motivations of the Master. With a kind and attractive kitchen boy, Cricket, at her side, Penny vows to escape the confines of her school and the strict rules that dictate every step she takes. But at every turn, the Master finds a way to stop her, and Penny must find a way to escape the school and uncover the secrets of her past before it’s too late.

I don’t remember the last time I finished a book and gave it one star, and I’ve never posted a full review for a one-star book, but here we are. I don’t think I enjoyed a single thing about this book. The cover is the only redeemable thing.

My biggest issue was the pacing of this book. There was minimal set-up and exposition. You get four pages setting up the characters, the school, their life, and then BAM action starts. Literally three chapters into the book, what seems like a climax is already occurring. I wanted at least four more chapters setting everything up, exploring the day-to-day life of the characters, the school, and their routine. Without that set-up, the stakes seemed really low. I don’t have a clear picture of what Penny’s life is normally like, so why would I worry when things start to change? I don’t have that contrast, so I can’t understand why the stakes are suddenly so high. Additionally, the page-to-page pacing seemed weird. Maybe I read this too quickly or something, but it seemed like so much would happen in the span of a page, and it kept going.

SPEAKING of the characters, there was not a single well-developed character in this book. The main character sucks, the love interest has the personality of white bread, the villain was the blandest, most boring villain ever with the weakest backstory possible. The weakest possible backstory. The villain’s sidekick, literally named Primo, was bad just for fun? And every character is totally willing to help the main character with whatever she needs, which is one of my biggest pet peeves. Literally, the main character helps a pickpocket once, and he’s suddenly willing to do anything for her for the rest of the book. Why?

The writing isn’t bad, but it also isn’t stellar. There are definitely some “devices” the author clearly enjoys that were repeated a ton throughout the book. She really likes using one lines to end a chapter. I think nearly every chapter ended with a one-liner, and often those one-liners were just repeats of what had just been said. Out of 42 chapters, 26 of them ended in one-liners.

I’m truly finding it hard to say something good about this book. Usually the least I can say is that the setting was interesting, and it was, but it was also so undeveloped that I can’t even really say that, which is sad because the setting is a secluded castle in Italy.

I think that’s also one of my biggest issues: this book had a lot of great potential. The concept is really interesting and the setting could have been amazing. I mean, a ballet boarding school in Italy with a mysterious Master who seems to messing with everyone’s memory? That could have been so good. But it just wasn’t. It needed significantly more exposition. It needed to slow down and breathe for a minute. It needed to remove 15% of the action that happens and just enjoy what was happening. It needed to explore the main villain a little bit more and give him a better back story. It needed to explore everything just a bit more. But it didn’t do any of those things. Instead, it just sped along as fast as possible with as much action as possible, and hoped that made up for it. Unfortunately, it did not.

Ultimately, I do not recommend this book. It’s not offensive or hurtful in any way, it’s just also terrible and there are way better books out there.

But, have you read this book? What were your thoughts? Do plan on reading it? Don’t, honestly.

11 thoughts on “My first one star review: The Midnight Dance”