I was recently thinking about some of my past favourite books and how much I loved them and how I never really got the chance to gush about them. But I also figured hey, I have a blog, I can do what I want. I did a similar post a while ago, so go check that one out too! So here are some of my old favourites, in no particular order.

This powerful series follows Amy Fleming through the loss of her mother and her struggle to continue the work at Heartland-a refuge for abused and abandoned horses.

I think we all know by now that I am a horse girl. So of course I read the Heartland series when I was younger. They were so good for 6 year-old me. I never really got into the TV show, even though it’s filmed in Calgary. My riding instructor was actually in an episode, which is pretty cool. But I never got into it. But the books were my favourites!

The Island Trilogy by Gordon Korman

They didn’t want to be on the boat in the first place. They were sent there as a character-building experience. But now that the adults are gone, the quest for survival has begun. This first book in a suspenseful survival trilogy delivers the gripping drama of people battling the elements to younger readers.

I think I read all of Korman’s trilogies. He wrote a bunch of survival-esque ones. Island was the first I read, which is about kids who get stranded on an desert island and then find a nuclear bomb, which looking back is questionable. But I really enjoyed them at the time, and I genuinely think I still would if I re-read them. There was just something about the desert island and them being at sea. It was really interesting.

Jody McGrath’s dolphin dreams are coming true! Her whole family is sailing around the world researching dolphins – and Jody is recording all their exciting adventures in her dolphin diaries

Jody can’t believe her dolphin voyage has begun. A whole world of discovery awaits her aboard the Dolphin Dreamer.

But an unexpected passenger threatens to spoil the trip of a lifetime. And when a sudden storm puts Jody’s life in danger, who can she turn to for help?

Possibly the cheesiest on this list. But honestly, for 7 year-old me, these books were so good. They’re about this girl who gets to travel and learn about dolphins. It was basically my dream come true. I mean, live on a boat, swim with dolphins in the ocean, save the environment? I was pretty much ready to sign up when I read them. I probably wouldn’t read these nowadays, but if anyone has kids that like dolphins, they’d love these books!

Orphaned Heidi lives with her gruff but caring grandfather on the side of Swiss mountain, where she befriends young Peter the goat-herd. She leads an idyllic life, until she is forced to leave the mountain she has always known to go and live with a sickly girl in the city. Will Heidi ever see her grandfather again? A classic tale of a young girl’s coming-of-age, of friendship, and familial love.

I had the Dalmatian Press adapted version, and it was amazing. I always wanted to be like Heidi and live in the Swiss Alps. Her life sounded so lovely and peaceful. I’ll probably read the full version someday.

After her parents die, young Mary Lennox chooses to stay our of the company of others. She becomes very unpleasant and has no friends. However, Mary’s life changes when she goes to live with her uncle in the country, where she discovers a wondrous and mysterious garden.

This is a memorable story of how a lonely young girl finds her place in the world.

I also had an adapted (maybe?) version of the Secret Garden that I loved. Again, it was so magical and I loved it. I think adapted books are great, honestly, especially for children. They definitely made me want to read more.

Laura Ingalls and her family live deep in the Big Woods of Wisconsin. Their log cabin is surrounded by miles of trees, and their closest neighbors are bears, wolves, and panthers. Daily chores keep Laura and her sister Mary busy, but they still find time to go exploring with their dog, Jack.

I read the first three of these books (until On the Banks of Plum Creek) and I loved them. There was something about living in the woods or the prairies (or the Swiss Alps, or a mansion with a secret garden, or a boat) that really appealed to me as a kid. Any adventure-type books were right up my alley, which is weird because I tend to gravitate away from those a bit more now. But these ones were some of my favourites. 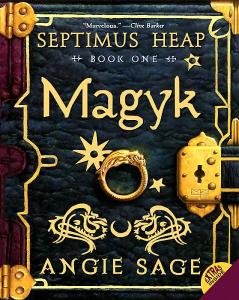 The 7th son of the 7th son, aptly named Septimus Heap, is stolen the night he is born by a midwife who pronounces him dead. That same night, the baby’s father, Silas Heap, comes across a bundle in the snow containing a newborn girl with violet eyes. The Heaps take this helpless newborn into their home, name her Jenna, and raise her as their own. But who is this mysterious baby girl, and what really happened to their beloved son, Septimus?

The first part of this enthralling new series leads readers on a fantastic journey filled with quirky characters, clever charms, potions and spells, and a yearning to uncover the mystery at the heart of this story…who is Septimus Heap?

These books were probably considered my favourites at one point. I loved them so so so much. I don’t know how many times I reread the first two. I just loved the characters and the world and the story. It was so interesting. I highly recommend them!

A legendary ghost ship. An incredible treasure. A death-defying adventure.

Forty years ago, the airship Hyperion vanished with untold riches in its hold. Now, accompanied by heiress Kate de Vries and a mysterious gypsy, Matt Cruse is determined to recover the ship and its treasures. But 20,000 feet above the Earth’s surface, pursued by those who have hunted the Hyperion since its disappearance, and surrounded by deadly high-altitude life forms, Matt and his companions soon find themselves fighting not only for the Hyperion—but for their very lives.

This is the second of the Matt Cruse series by Kenneth Oppel, which is about the guy Matt Cruse who works on a blimp (I think?) and it’s so interesting. I mean, this one basically takes place on a pirate ship in the sky. What could be better than that?? It’s so good. The setting of the abandoned airship is so interesting, and the characters are great. There are some creepy things, action, romance, flying. I don’t think I’ve ever read another book that took place in the air. I would definitely recommend still giving this one a go.

So those are all of my throwback favourites (for now!). Did you ever read any of these? Let me know!